We are sitting in the dark. Nobody dares to say a word, as if it would prevent us from seeing them: Northern Lights.

It might seem a bit bizarre, watching us – a bunch of people, all wearing the same black and blue overalls and bumpy shoes, thick gloves and hats equipped with a white skiing stick that is too tall for most of us. It is a group of people having the same goal: to see the Northern Lights in Finland. We started our trip in Rovaniemi in Lapland, close to the arctic circle. After about 40 minutes on a bus driving on the most crowded motor way in Lapland (yes, we even see a handful of cars crossing our path … :-)), we turn into a dark and narrow street. There are no lights, and that is what makes it special. It leads us away from the city, the car headlights, the shiny Christmas decorations and our greatest enemy at that point: light pollution. 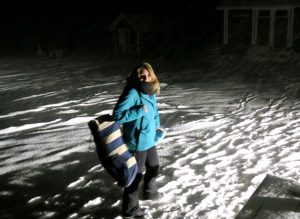 We are heading for Kätkävaara between Rovaniemi and Kemi, which is known for its vast nature and the great chances to see Northern Lights. It’s geographical position as well as a little hill without trees offers an unobstructed view of the sky and the horizon. It just takes us a short walk up the hill, which is surprisingly exhausting, due to our heavy and thick clothing that helps us cope with the low temperatures. At our arrival on top of the hill everybody finds a spot on a stone or a wooden bench facing the sky. “Turn off all your flashlights, mobile phones and camera flashes!”, a loud voice commands. It’s our guide who immediately starts explaining the adjustments for our cameras: “Make sure you turn off the flash or any other possible lights. Choose a long exposure between 20 and 40 seconds and turn the ISO up to 2000. White balance for accurate colours.” 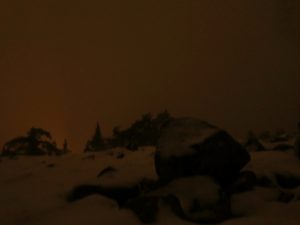 It becomes silent. We are sitting in the pitch black, only the snow on the ground makes it possible to see movements. It has started snowing as well, which is not a very good sign, as the sky must be clouded. “No worries”, tells us our guide. “Snow does not mean, we won’t see any northern lights. Just keep your eyes on the horizon and try to take pictures with the settings I showed you. The camera might see something, our eyes cannot see yet!” The pictures turn orange. “Orange? That’s interesting”, says the guide. Every picture turns orange, not only ours. Is that good?

No. It’s the light pollution from houses in the surrounding area and headlights of cars that are driving on the streets below us occasionally. Even though this place is far away from any possible light sources, we see it and now we know what the guides mean with “light pollution”. It’s the greatest enemy of the northern lights. You can only see them, when there are no lights, or as few as possible. I have never thought of how long light travels. In the dark, the headlights of a single car can be seen over kilometres – if the conditions allow it.

The snowflakes falling from the sky are getting bigger and now the pictures turn out dirty black. Nothing can be seen except for the white ground like a spotty carpet and a couple of trees around us.

Aurora stories by the Finnish Barbeque in the Tipi 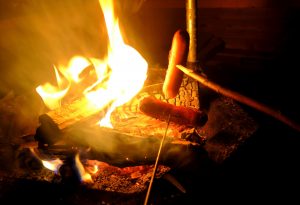 Time for us to warm up by the fire and roast sausages and pancakes over it in a Finnish barbeque. By the cracking fire we learn how the northern lights or also called Aurora lights are formed. They are collisions between electrically charged particles originating from the sun and entering the earth’s atmosphere. They appear above the magnetic poles of the northern and southern hemispheres and show themselves in various shades of colours. It depends on where you are located and how many metres above sea level you are – you can also see them from an aeroplane, but they will appear in different colours. These charged particles present us with a magnificent wonder about 60 miles above the ground.

The guides start to pack up the things and the fire slowly goes out. No Aurora lights for us. The mood among the people around the dying fire is subdued. “Maybe next time”, somebody behind me says. “We’ve been on this tour every night of the week, tomorrow we’re going home. We haven’t seen any northern lights”, says a woman from Singapore with a sad voice. I feel sorry, not only for us, but for everybody who travelled to Finland without seeing what everybody wants to see. “Aurora lights are hard to forecast. Even if it’s not snowing, you never know whether they appear. They are really shy sometimes …”, one of the guides smiles. “You just have to come again!”

I will. Maybe because a week after our tour, the most beautiful pictures have been taken at the very spot in Kätkävaara, where we stretched our necks and squeezed our eyes in order to find the faintest glimpse of light on the horizon …

Maybe you are lucky to see the Northern Lights in Kätkävaara 🙂