… even dared thinking about traveling to Jerusalem. Catholically raised, I was always aware of Jerusalem being THE worl’s religious hub, but I never informed myself about what you can actually see there. When I finally arrived there, I was amazed by the religious melting pot that presented itself to us.

In a mini-bus we drive towards the city of Jerusalem. The light-brown sand stone already leaves footprints in our eyes. Even though I am not ultimately religious, I am looking forward to reach this spiritual hub. The place of so many stories that have accompanied me throughout my childhood. The images that had formed in my head will now become reality and I am one of thousands of visitors – all of them with different objectives. Religious or not – you cannot deny the specialty of this town of Jerusalem.

We started our tour on the Mount of Olives, which is mentioned in many stories of Jesus’ life in the bible’s Gospels. It has been used as a Jewish cemetery since more than 3,000 years with about 150,000 graves. Christians consider this the place where Jesus ascended to heaven, this is why the Mount is worshipped by Christians from all manifestations. They also believe that when he returns, the resurrection of the dead will start exactly there, which is also why so many Jewish want to be buried on the Mount of Olives. 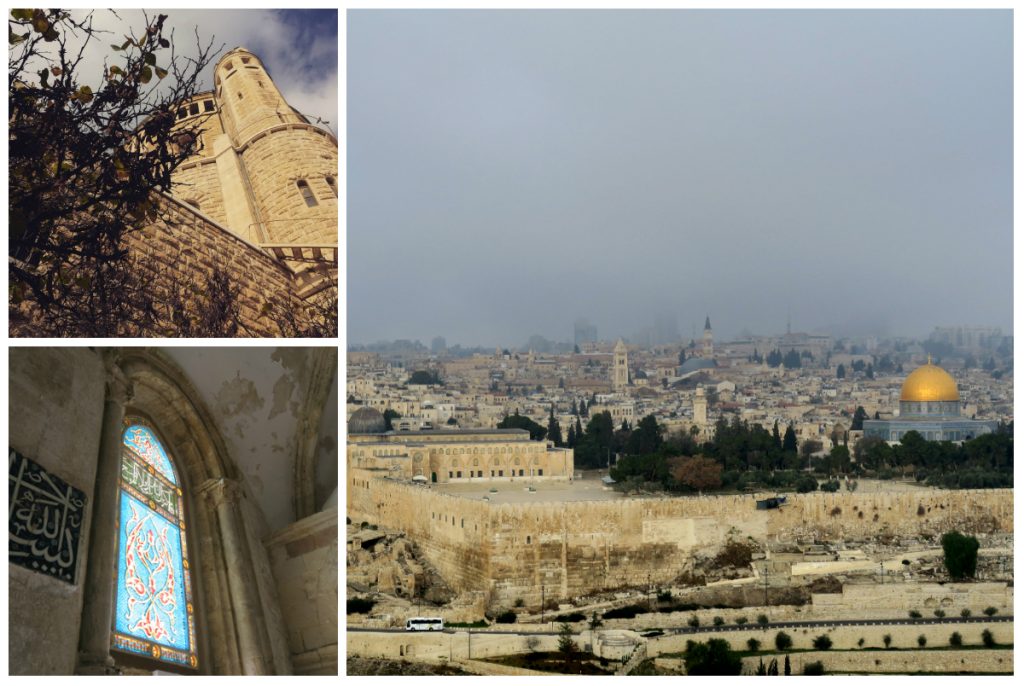 We continue to enter the medieval building in bright sand stone that homes the room of the Last Supper. Sorry, what? A room in a building from the 12th century cannot be the room of the last supper? Thank you. It is not the original room. But it is believed to be on the spot or near the spot where the original room really was. Directly below this room on the 2nd floor, you can visit the tomb of David (men and women enter separately, men have to cover their heads). Next to it, you can visit the Dormition Abbey, which is a German Benedictine church from 1910.

The dusty city below us seems to be calm and even empty. But we will soon realise that this was only an impression from afar.

The Wailing Wall – The Place of Weeping

We start from the Western Cardo and make our way through the serpentine alleyways of the Jewish, Christian and Muslim quarters. Smoothly, we cross from one quarter to the next one – always witnessing the different lifestyles, scents of spices and religious mementoes. Each belief for itself and yet together on limited space. It is amazing how those different perspectives live together so closely because they share their holy spring. Every quarter has its different characteristics, but everyone we see is smiling and welcoming us to Jerusalem.

From the Jewish quarter we step down a stone staircase and arrive on a huge place. In front of us, the Wailing Wall. The Wailing Wall is the only existing piece of the former Temple Mount, which was destroyed by the Romans. Maybe we have to state here that Jerusalem was destroyed nine times, and also rebuilt nine times. This is why nothing is at its place of origin. With one exception: The Wailing Wall. It is a part of the Western Wall that once built the Temple Mount and half of it is underground (and can also be visited, but you have to stay in line and pay an entrance fee to get there). At first, the Jewish came here to mourn the destruction of their temple. However, it was built for all nations and therefore, people from all beliefs gather here to pray and to leave their little prayer notes behind. Many of them touch the wall, they kiss it or lean their foreheads against it, eyes closed, while whispering their prayers. After they leave their notes, they return walking backwards, not turning their back to the wall. 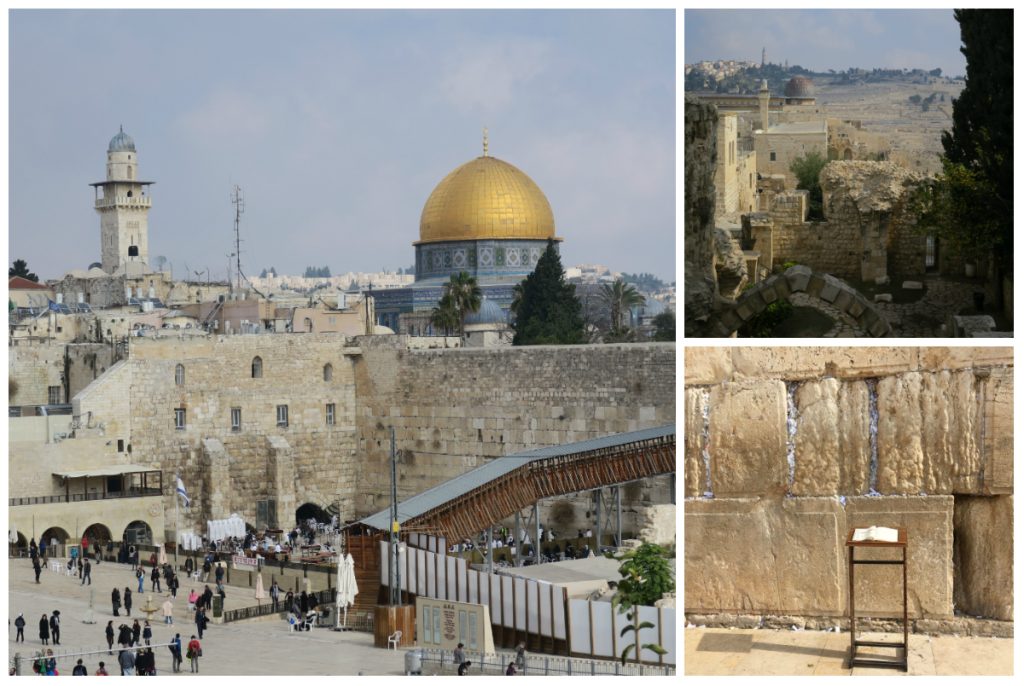 If you are not able to visit the Wailing Wall and leave your personal note, there are even letter and online services to place your note there. To make sure that every wish and prayer has enough space, the little pieces of paper are collected on a regularly basis and buried on the Mount of Olives.

Via Dolorosa – The Way of Suffering

In the midst of all the various quarters and their winded alleys, we arrive at a house with a metal plate and the Roman number five (V). This is the start of us following the Via Dolorosa, the Way of Suffering. It is believed to be the path that Jesus walked with his cross. It has 14 stations, as 14 is a holy number in Christianity. All those stations are marked with a plate and its number and guides can tell you exactly what is supposed to have happened here to Jesus more than 2,000 years ago. The fifth station marks the point, where Simon helped Jesus to carry his cross. On the right side of the door below the plate, we see a mold into the stone and learn that this is believed to be the space, where Jesus supported himself and where he touched the stone. The mold shimmers from all the hands that have touched this spot ever since him and of course, we touch it too. 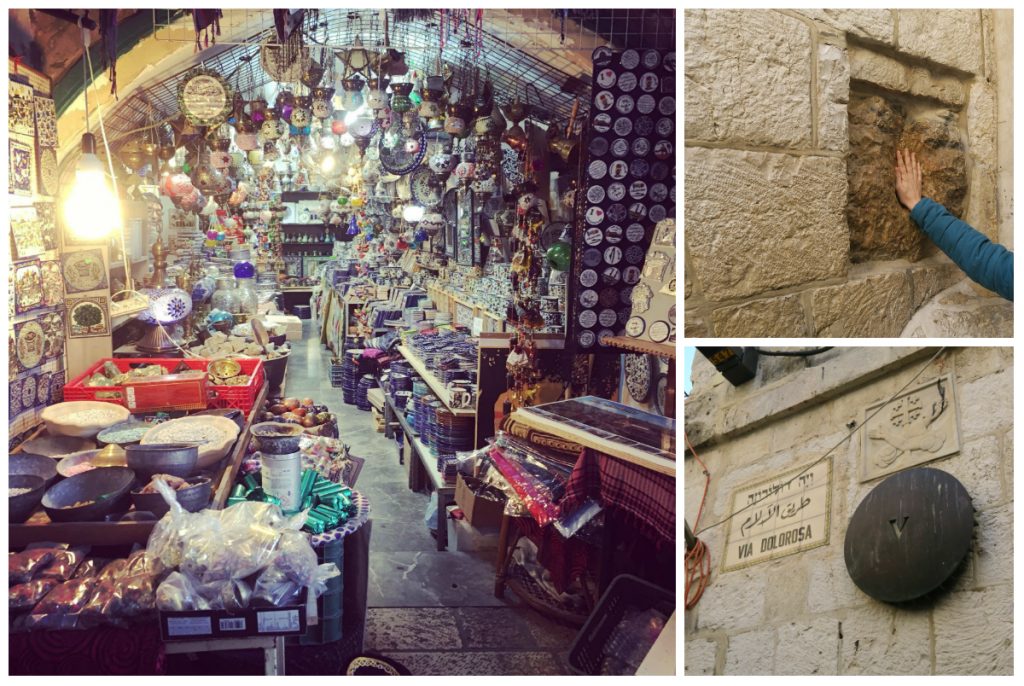 Slightly surprised that this highly important street for Christianity is surrounded by shops and souvenirs, we ask our guide whether this time it was the original path. He smiles and shakes his head. This winding path and its stone steps were built about 200 years ago. But it is believed to be near the original path Jesus had to walk with his cross on his shoulders.

The Church of the Holy Sepulchre – The holiest place in Christianity

It is a little square with masses of people moving in and out of a church in the Christian quarter of Jerusalem – The Church of the Holy Sepulchre. In this church, the two holiest sites of Christianity are supposed to be: The place where Jesus was crucified and the place where he was buried and resurrected. The tomb however is enclosed by a little church inside the church or a shrine with a tiny entrance. The church also homes the last four stations of the Via Dolorosa. 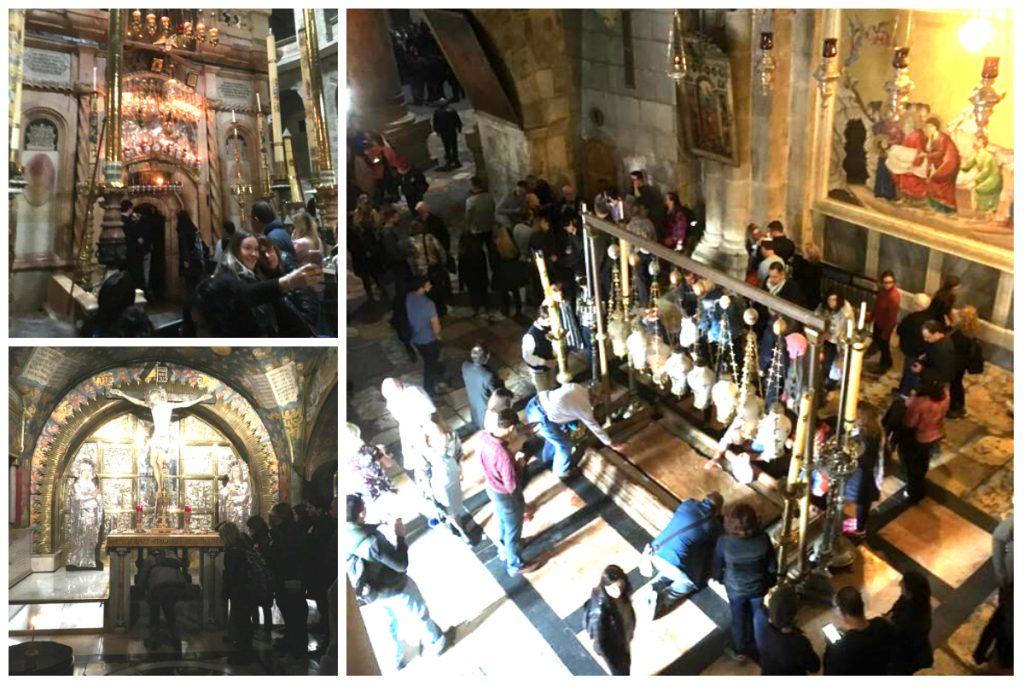 Inside, every major Christian belief has its own area in the church. When you enter the church, you will immediately see people kneeling down to kiss the Stone of Anointing. It was believed to be the stone where Jesus was anointed, but now we know, it is not the original stone. However, people touch it, kiss it and put things on it to have it consecrated. On the right side, you will find the Chapel of the Crucification, where you will see people crawling under the altar and trying to reach out to touch the site where Jesus’ cross was believed to be situated during his crucification.

If you really want to find out more, you have to take your time, stand in line for the grave and have a great guide at hand. There is a lot to see in this church, but regular tours only make you browse through the various chapels and you do not get to know the history beneath it.

The Dead Sea – Just floating around

After a quick Falafel snack, we board the bus again which takes us to the Dead Sea. We drive about one hour, which gives us time to think about what we have seen in Jerusalem. It is almost unreal to have been there. We have been in the world’s religious centre and only had time to see the most important aspects. It is a bit much to grasp.

The day ends in a lighter and easier way: With a bath in the Dead Sea. I expect to smell the salt right away when I climb out of the car, but I do not. We change and walk down, pass the lowest bar in the world at -420 metres and are amongst hundreds aiming for the same spot. In a designated (and small!) area, people float around trying not to bump into each other. White plastic chairs stand in the sand and are covered with towels and clothes. We capture one of the plastic chairs to deposit our belongings and one after another we slowly walk into the Dead Sea. The ground is slippery with the allegedly healthy Dead Sea mud and we try not to splash into the water as we are afraid to get it into our eyes. But – we are successful. With our chins up, we let ourselves fall into the water and … float! There is no chance trying to swim regularly and you definitely don’t want to put your face underwater. A little splash of water touches my lips and it burns ridiculously. Yes … chins up! 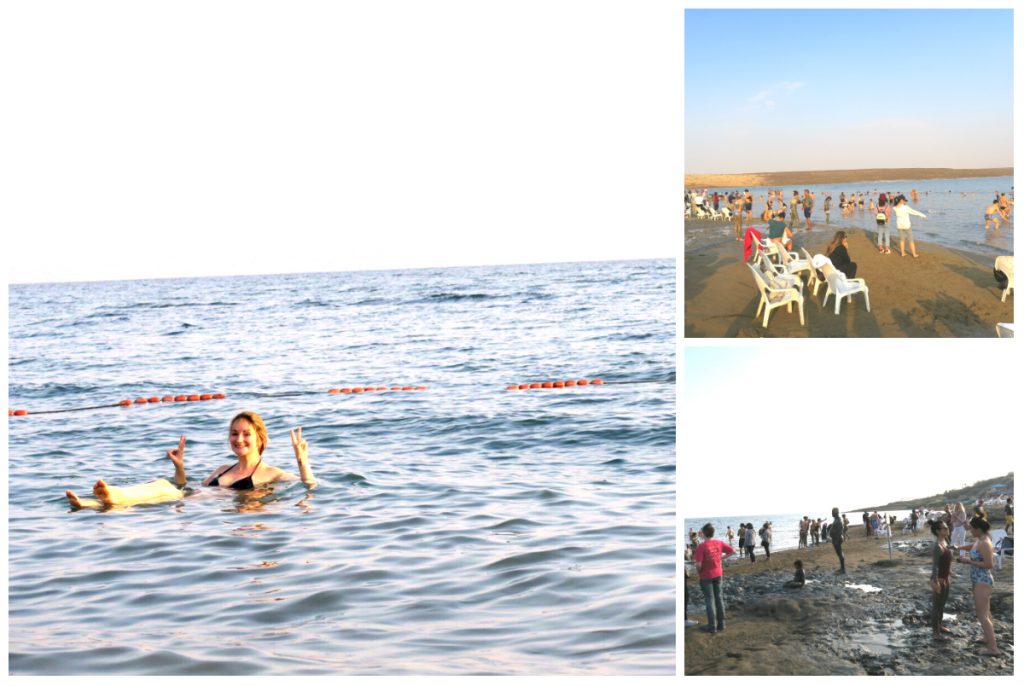 It is an almost absurd scene with people taking pictures of each other, some of them with a newspaper or their mobile phone in their hands, some of them completely covered with the greyish-brown mud that is supposed to heal every sign of illness. And – of course – we do it, too. We rub ourselves with mud, take pictures, try to pose by floating around and try to make it look like noone else was around us 🙂 It is definitely something special … too bad there are so many people and the space is so limited. On the other hand, the Dead Sea is highly endangered. It has been shrinking for years – about 1 metre per year, due to a diversion of the Jordan river. The high degree of salt in the water even formed salt columns at some places. Without adding water to the Dead Sea (which is in fact a lake), the water becomes even saltier. This also eliminates all sources of life within the sea, except for bacteria.

We wash off the mud and crave a freshwater shower to wash off the sticky salt. The end of our trip takes us to a souvenir shop, where people buy the mud of the Dead Sea they just had all over their bodies for a lot of money. Obviously, the trend for Dead Sea products has not yet seen an end … we just hope that it can exist in the future as well.