It is the second largest event of its kind in Switzerland, yet the town where it takes place is far from big. The Samichlaus parade in Beckenried at the coast of the Vierwaldstättersee is something to see for yourself.

People line up alongside the streets and wait for the traffic lights to be turned off. As soon as they are out, several men position themselves in equal distances from each other. Everyone holding a rope in their hands. They nod and start swinging their ropes, first simultaneously, then in a prepared rhythm. They are called “Geiselklöpfer” and you can here them from far: they produce banging sounds with their ropes. And you definitely don’t want to come too near to them 😉

They look a little bit like church windows, with colourful and artistically created cardboard patterns lit up with candles from the inside, the so called “Iffelen”. First, small children make an entry into the parade with little lanterns between them and guides taking care of them. They are the secret stars of the parade. But right after them, the big Iffelen start to appear. Majestically, they are carried on the shoulders and heads of the bearers, who turn around themselves once in a while, so that everyone can see the art on both sides.

Pupils in school sometimes create Iffelen as part of a school project. But also adults carve their imagined patterns into cardboard. It takes up to about a year to finish the complicated and delicate work.

In Switzerland, there is no Santa Clause in the way there is in the US or in the UK. It is very similar to my home of Austria, as there is the “Christkind” coming to all our homes to gift us with presents and to spread the Christmas spirit. However, on December 6th “Samichlaus” is coming to the homes of the families alongside with his companion “Schmutzli” (just in case you have been bad :-)). 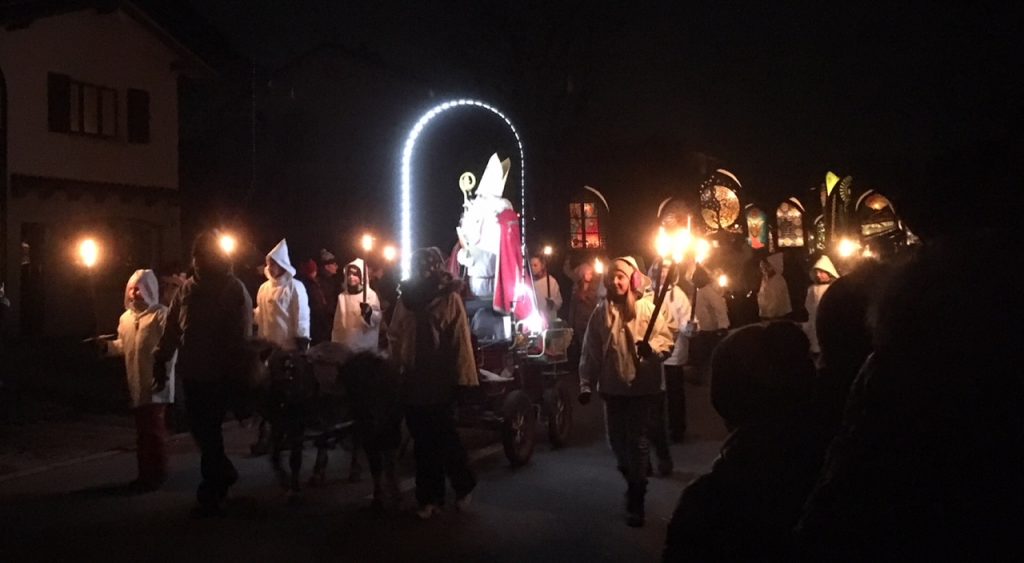 Samichlaus in Beckenried drives on a little carriage pulled by ponys. Previously, there were horses, but they were easily irritated by the fire of the torches. His presence is rather short and unspectacular compared to the rest of the parade. However, as soon as the parade is over, it is his turn to visit the families with children in their houses.

In Beckenried, there are about 500 men – and only men! – who walk slowly through the roads of the town, ringing their huge bells in front of them. They wear white hoodies and most of them have a “Krumme” dangling from their mouth. It looks like a crooked and thin cigar – their glow and smoke emerges between the lines of the hooded men. The sound of the bells ringing in a slow but steady rhythm is ear-piercing. It has a creepy atmosphere, not only because of the bells and the smoke, but also because of the torches and – above all – because of the great number of horn blowers, who add a sound to everything that goes right through you.

All of them together – Village Square is packed

As all of these people passed us by, we start walking. Our goal: the village square, where all of them come together for a final round of lights and sounds and eery atmosphere. A couple of minutes walk, and we find ourselves between masses of people. All of them are looking forward to a final glimpse of Samichlaus, the magical lights of the Iffelen and the sound fusion of horn and bells of the Trychler. Definitely something you won’t want to miss, when staying in central Switzerland at the beginning of December.