It was on a hot, sunny afternoon in September 2014, when two British guys and I were enjoying the sun in Corralejo, Fuerteventura, and were thinking about a possible adventure.

“Yes! They say, it is beautiful at sunset.”

“Oh, I bet it is even more beautiful at sunrise!”

“Great, let’s have breakfast on top of the volcano during sunrise!”

“Even better, let’s have champagne breakfast on top of the volcano during sunrise!”

And the plan was set. We would meet at 5:30 am to grab some old bikes from the camp and cycle to the bottom of the volcano. The rest would be a 30 minutes climb to a beautiful sunrise. That’s what we thought….

Cycling in the pitch black

When we started off towards the volcano, we weren’t exactly sure where we were going and so we just cycled into the direction we thought would be the right one. However, repeatedly we had to turn around as we arrived at meter-high fences with barking dogs behind them.

There was no light, there was no sign of the volcano, which hid in the black of the night. Not even the GPS knew where we were going and so we just gave up.

A bleeding knee and sunset at the beach

On our road back, we decided to have our champagne breakfast at the beach and boom! I fell! Or my bike fell … I cannot recall what happened exactly … yet, I stood up with a bleeding knee and aching bones. My new British friends were very patient and helped me coping with my shock and shaking knees. The sun appeared shyly on the horizon, so I jumped up and we were cycling towards the beach, with the sun lighting the way (which was good, so we could finally see where we were going …).

Plop! At the beach we opened our bottle of finest Champagne of 6 Euros from the supermarket nearby, enjoyed our French croissants with Nutella and some chocolate frio. By the way, we witnessed one of the most beautiful sunrises I have ever seen. Nobody was there, just the three of us, happily enjoying the moment with a mouthful of Nutella and champagne.

Sunrise at the bottom of the volcano 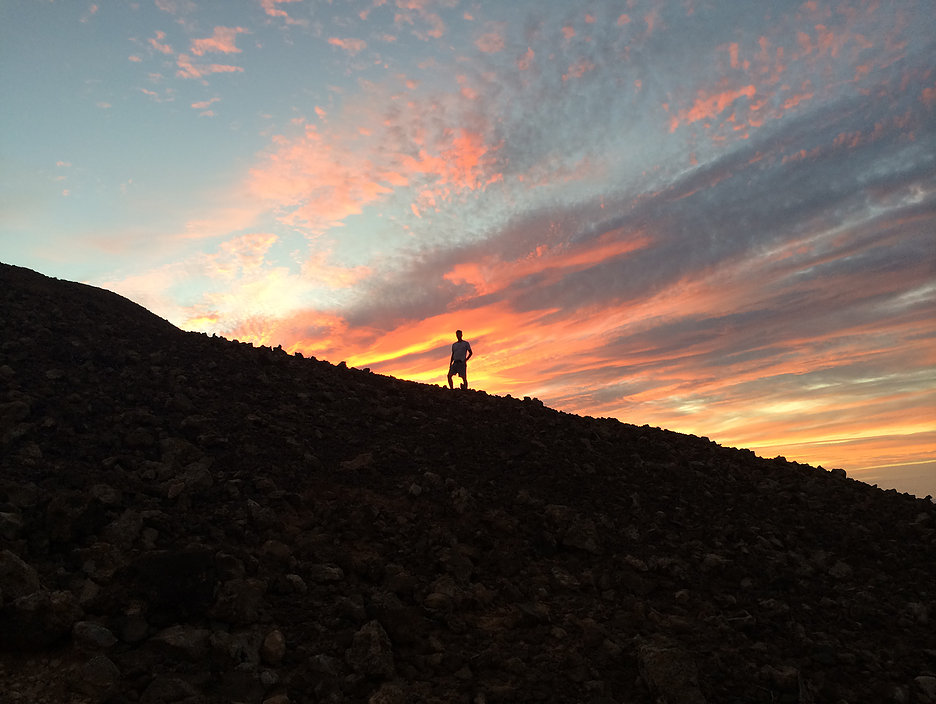 “Look! It is there, it has not vanished in the dark,” one of my British friends said, and we simultaneously turned around to see our “enemy”, Calderon Hondo, the volcano. Since we did not really know the name of the volcano during our mission, we named it “Big Jim”. We listened to the sounds of the waves awakening during the shy kisses of the first rays of sun. We soaked up the lonely atmosphere which would soon be changed by sun-seeking tourists at Flag Beach.

Oh, and yes, we did it! We climbed the volcano … see for yourself!