Screwing up my eyes through the steam, I can see it. I am in the Hammam for women in the southern Moroccan town of Tiznit. Blue and pink buckets covering the floor and water is dropping from the ceiling and the walls.

«Have you already been to a Hammam, mademoiselle?», asked the inhabitants of Tiznit. No, I haven’t. Even though I have read about it, I am not sure what awaits me behind the walls of the brick building, just a couple of steps from the Medina. I imagine loads of soap and foam covering the bodies lying on hot stone tables and oriental music…

1 Euro for washing yourself

The Hammam is an Arabic tradition with its origins in times where no bathrooms were built in private homes. In those times, men and women found their retreat within the gender separated areas of the Hammam, where they washed themselves. This ritual might take hours where people scrub their skin to remove the dirt of their working days in the areas in and around the desert.

Nowadays, the Hammam is similar to a little spa, where men and women find separated areas with massages and other treatments – and of course, the traditional washing ceremony. When I arrived at the Hammam, I paid 10 Dirham, which is about 1 Euro for washing myself. 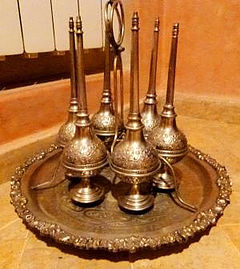 No idea where to go

Two different entries, one for men and one for women, invite to the Hammam. A couple of steps led to another door, and I already heard intense and very loud chatting in French and Arabic. With a little hesitation, I opened the door, and immediately my ticket was taken, the chatting stopped. I  smiled at the women covered in colourful dresses and scarves. They looked at me with big eyes. Alright, I am not one of them. Well, that doesn’t matter at all. In my best French I told them that I didn’t know what to do and where to go and asked them for the next steps. They continued looking at me and checking every inch of me. One of the women lifted her hand into the only possible direction… Mmhh… That does not help a lot.  Two European looking women entered the Hammam in this very moment. Again I asked for help and luckily they knew what to do. «Just leave your clothes here and keep your panties on. Take one of these buckets and put in your shampoo and your soap.» Oh no! I was told I wouldn’t need anything, I did not have any shampoo or soap, I just had a couple of sips of water left, nothing more. «Don’t worry,” said the Swedish lady, “we have plenty!»

Behind the steel door

We approached a heavy and huge steel door. After opening it, I was not able to see anything, steam was all around me, my skin was covered with wet drops immediately. I screwed up my eyes in order to see better but it seemed as if a thick layer of fog was in front of my eyes. I heard water splashing and buckets pushed across the tiled floor. The walls were covered with white and blue tiles, and looking up the steam accumulated in one big cloud. «Come on, let’s go somewhere warmer!», the Swedish woman said and carried her buckets from one steam room to another. In the last of three rooms, the temperature was the highest and the steam the thickest.

We sat down on the floor and started the ceremony. We rubbed soap all over our body and sat there for a while. Some women had washrags with them, so the foam could evolve strongly. The women washed their hair with a lot of joy, taking their time and massaging the shampoo into the other’s hair. Some women came with friends and some alone. Some carried a small chair with them and some did not wear any clothes.

After a while my eyes became used to the steam and this offered me a completely different view of Moroccan lifestyle. You might ask about Moroccan women’s haircuts, as you can only find hairdressers for men. You might think that they maybe don’t see a hairdresser and let their hair grow beneath their veils. However, in the Hammam nobody covers their hair, and in fact the Moroccan women have beautiful haircuts. Very modern ones with highlights or trendy colours. They have stylish short cuts, undercuts or bobs and wear fashionable bikinis or panties. During the day, all of this is covered, but in the Hammam, the beauty of the Moroccan ladies appears as soon as the veils fall. Women are among themselves, discussing intensely and loudly whatever topic they want to talk about. They can just be themselves.

After scrubbing every part of my skin and enjoying the warmth of the Hammam in Morocco in January, I said Goodbye to my Swedish friends, and left the secured women’s area. I dried my hair just with my towel and got dressed again back in my clothes. I smiled and said “Au Revoir” to the Moroccan women who had kept an eye on me earlier. «Au revoir, mademoiselle, a la prochaine!»