Even though Arequipa is known as the „white city“, our visit was as colourful as it can be. Let me share our highlights in Arequipa with you. 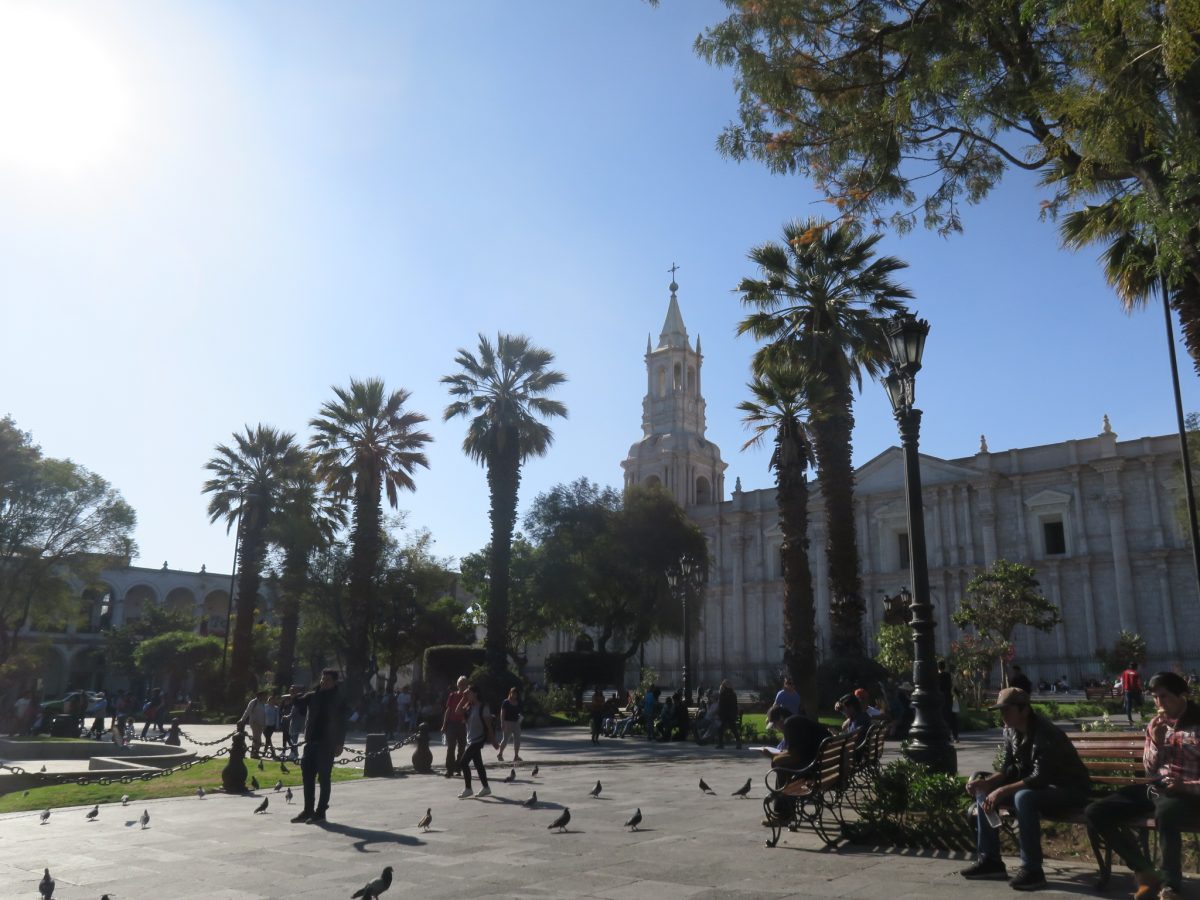 The journey to Arequipa is long. We board our night bus in Ica and spend 12 hours in the most comfortable bus I have ever seen. If it wasn’t for the bumpy ride and the noises the bus and the other passengers made, I would feel like travelling first class on an airplane. The seats are as comfortable as possible; they can be adjusted to 165 degrees into a nice sleeping position. With a blanket and a pillow, we try to sleep during the 12 hours to our next destination: Arequipa.

The buzzing old town of Arequipa

More than one million people live in Arequipa. The traffic reveals the fact that it is a really big city. However, as soon as you enter the old town, it becomes quite homy. Stone buildings, cobble-stone one-way streets, shops and restaurants and sights at almost every corner. We meet our guide Caroline in the old town, where she shares a lot of interesting facts. The most astonishing: We just had an earthquake and did not even feel it. Caroline nods and tells us that it is normal not to feel it while walking through the city. The number on the Richter scale says 5.6 – shouldn’t we have felt that?

We discover the Plaza de Armas. Every city in Peru has the main square named after the army. It is the place where most battles have been fought. In Arequipa, the big basilica dominates the images. It is white, very big and has two towers. Caroline tells us that originally, it was a small church, which was destroyed several times by earthquakes. They rebuilt it everytime, each time bigger and “whiter”. And now it is a landmark in Arequipa that fascinates every visitor. The Plaza de Armas is also the perfect place to taste a specialty of Arequipa: Queso Helado. What sounds like cheese and ice-cream is actually some kind of cheesecake flavoured ice-cream served in a plastic cup with cinnamon on top of it. I love it!

Learning to distinguish Llama and Alpaca

Our guide takes us to a lovely patio with a big fountain in the middle. „Don’t eat in those restaurants, they are just expensive and the food is not good“, she warns us. But she leads us to a shop with Llama and Alpaca goods. With a little exhibition in the back of the store, they explain the difference between the fabrics and the various animals. Long story short: Vicunas provide the most delicate fibres and a scarf can cost up to 600 Euros, a poncho up to 1,000 Euros. What? Yes, indeed. The lovely lady lets us touch one of those valuable scarves and shows us the difference to the Baby-Alpaca and the Llama. To be honest, all of those fabrics are soft, choose the one you like best and the one your budget allows 🙂

The last stop of our tour leads us to the market in Arequipa, where you can explore the uncountable varieties of potatoes and corn, where you see fish and meat hanging side by side, enormous fruit stands and ladies who wave at you for mixing smoothies, where you can go to a sharman’s booth to buy stuff for rituals or clothing booths with all the colourful Peruvian souvenirs.

The final stand for us is the one selling coca leaves. Caroline recommends to buy a couple of leaves, just in case we get a headache in high altitudes. She shows us how to build the little package: take five or six leaves and stack them together. In the middle of it, you put an artificial sugar that is available in various kinds of flavours. This is to make the leaves sweeter, as they are bitter in their original taste. Now fold the leaves into a little package, place it between your teeth and chew it. You can swallow the juice that eminates from the leaves, but do not swallow the leaves themselves. After a couple of minutes, your tongue and also your lips might feel numb. When you are done, just get rid of the leaves. Peruvian people in higher altitudes chew the coca leaves all the time. When working in the fields, they tend to have less thurst and hunger, they have more energy and can work more efficiently. That is what they say at least 🙂 We say goodbye to Caroline and are happy about her explanations of her hometown.

We start the next day with a visit to the monastery of Santa Catalina. For 20 Soles each we enter a world of the past, yet it absolutely excites us today! At the entrance a big „Silencio“ written on the wall tells us to be silent during our visit. It leaves us speechless anyway. Especially the colours are mesmerizing! We stroll from one room to another, from one patio to the next one. The walls are painted in bright red and orange, blue as the sky and yellow. The calm of the monastery makes you feel like a time-traveller. We sit down in the patios and enjoy the view. Definitely something you have to see while in Arequipa. 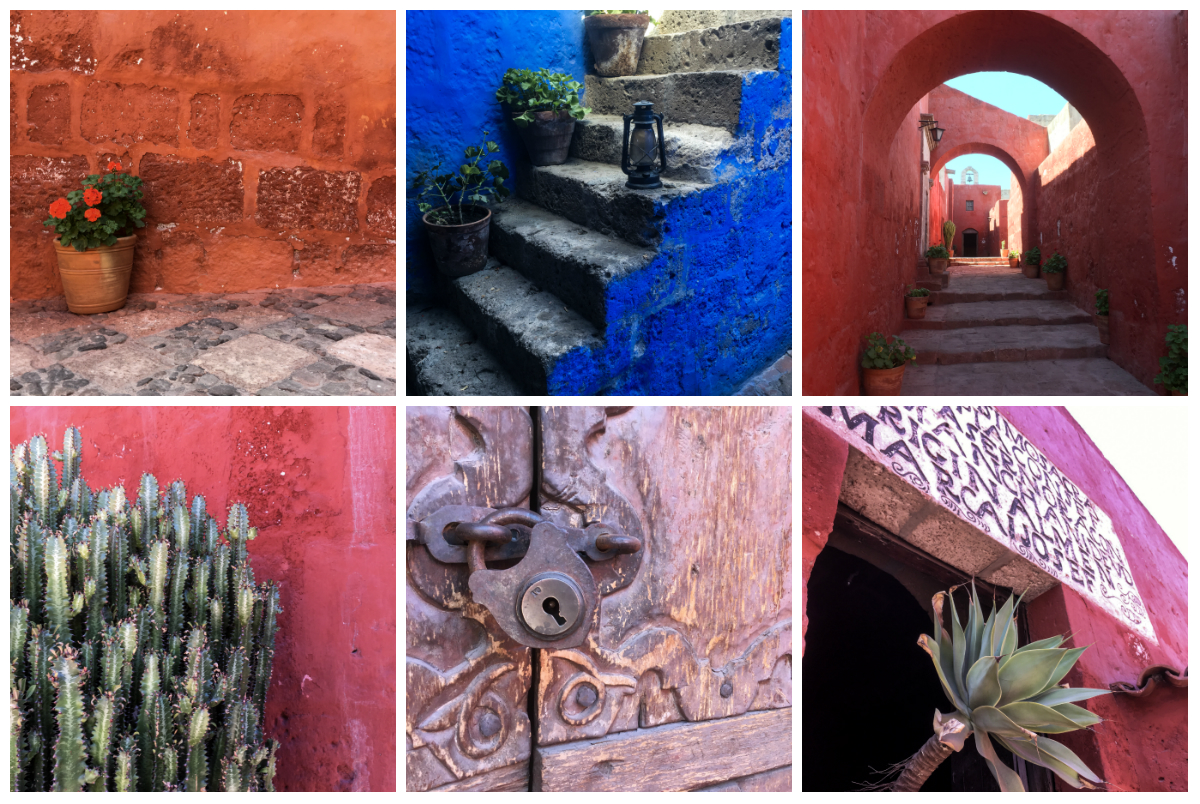 La Juanita – the mummy from the volcano

It is a bit hidden, but in the museum of Arequipa at the site of the university, you can find something very peculiar: Juanita, the ice-mummy (photographs not allowed). She was found in 1995 by expeditioners and after a lot of scientific work, she was brought to the museum in Arequipa. They gave her the name of Juanita. About 500 years ago, the girl of about 12 or 13 years was sacrificed to the Gods. People believed, and still believe, in Pacha Mama – Mother Earth. As the volcanos erupted and earthquakes shook the Peruvian peoples, they decided to make the hightest possible sacrifice to the Gods: an innocent girl. They brought her up the Ampato mountain of about 6,000 metres of height, celebrated a ritual on top of the mountain, killed her, and buried her there. Now, Juanita can be seen covered in ice in the museum in Arequipa. It is indeed a very special thing to do. You learn a lot about Peruvian and Inka culture. However, people are not sure whether it were the Inkas, who sacrified the girl. Many people today think that the Inkas did not sactifice human beings.

Arequipa is definitely one of the most beautiful towns I have ever seen. I was mesmerized by the colours in the monastery, by the white basilica of the Plaza de Armas, by the lovely cobble-stone streets and the atmosphere of the city. Most travellers stay there for at least 2 nights, as this is important to adjust to the altitude. Arequipa is situated on 2,850 metres above sea level. Normally, you should not have problems in this area. Just enjoy the views awaiting you at every step.