When I arrived in Lancaster County in Pennsylvania it felt like a time travel to the past. Inevitably the question of “where exactly am I?” popped up. Signs in English and German language showed me the way to the Pennsylvanian Dutch Country. Moving around in the Amish territory, the question of the geographical allocation was not the only one. Regularly I asked myself “Is this allowed?” or “Am I allowed to do this”, “Am I dressed properly?” or “Do they think I am evil because I don’t live according to their values?” 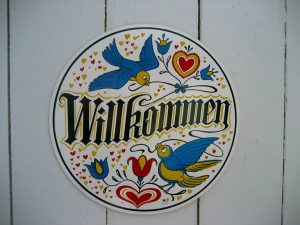 Family and values are up front

I cannot really offer answers to these questions. But what I saw there and across the US showed me that the Amish are very kind and helpful, especially with children. Amish children are brought up protected by the community. About 29,000 Amish live in Lancaster County. They have their own newspaper collecting letters from various Amish communities across the US. The question about their language is tricky and when asking them, you might get the answer  “I speak Pennsylvania Dutch”, including a weird look of how in the world don’t you know this and what language are you speaking then? You will see signs with the German “Willkommen”. Dutch may be a sloppy pronunciation of “Deutsch”, this is why there might be confusion regarding the language. Anyway, my mother tongue is German and I did not understand a word there …

Far away from our reality

When diving deeper into their culture and way of living, further questions arise, about the necessity of such a way of living in our times. About their future and about what kind of society surrounds them in the US. And yes, they choose to live this way. Every single one of them. Every born Amish is able to choose this lifestyle. Thus, babies are not baptized to become part of the Amish community. They grow up with their values and as soon as they are ready to decide whether to be part of this community for the rest of their lives, there is a special period of time called “Rumspringa”. This derives from the German term for “jumping around”, which basically means that young Amish may travel and make their own experiences in the world outside the community. They can either return and become officially Amish or stay away from the community. 80 to 90 per cent decide to come back. If they decide to leave the community after their baptism, they are not allowed to return.

The next question: Do they return because they are overwhelmed and overchallenged by the America that awaits them outside their territory? Everywhere you go, screens are installed to learn about the weather, the arriving train, the news – in a digital way, mobile phones ringing everywhere. Or do they return because their values are good for them, they are brought up that way and want to convey the same values to their following generations.

How the Amish live

I visited a house that was built according to Amish standards, even though no Amish family lives in this house. An elderly lady showed the visitors around and I learnt that the Amish go without electricity – they use propane gas to operate the fridge, the oven or any light sources. They work with water pumps and whatever they cannot produce themselves, they buy in supermarkets just like anybody else. Just a note aside: If you visit an Amish shop, try their home made jams especially tomato jam, it’s delicious!

When it comes to their dress code, the Amish dress in decent colours. Even though small girls are allowed to wear whatever colour they desire, they have to wear the classic apron. The older they get, the more moderate the colours get. Clothes are unicolour and rather dark, you won’t find any bright colours among Amish. They don’t wear jewellery of any kind, there is not even a wedding band. The difference between married and unmarried women can be determined on Sundays: the unwed woman wears a white apron. As soon as a woman gets married, she will never ever wear white again until her own funeral.

No summer wedding and religious beliefs

Since prayer situations can appear anytime, women always cover their heads. You never know when there might be a situation where a short prayer needs to be uttered. Women never wear buttons on their robes. This goes back to the fear of soldiers, whose clothes were covered with buttons in the front. They also don’t use any zips. Male Amish are allowed to wear buttons in an “emergency” such as fixing suspenders or in their work wear. Those buttons however are covered by vests or on top of their robes with their beards. Speaking of beards: As soon as a male Amish gets married, he will never shave again! This way, you will immediately recognize a married Amish and even see how long he has already been married.
Amish only wed in the month of November as this is the month where there is the least work on the fields. They won’t even be able to choose the day of their wedding, they only marry on Tuesdays or Thursdays, as these are the days when female Amish have the least work in the household. A mass takes up to four hours and takes place in the private houses of the Amish community. Two hours of preaches in German and two hours reading the bible and singing biblical songs.

These are the values that are communicated in Amish schools, where there are no teachers of our definition, but housewives of the community with the same educational level as everybody else. It is more important to gather personal values and craftmenship than knowledge, science or history. School ends at the age of 13 or 14. Boys make some kind of apprenticeship and girls help in the household until they get married themselves. Women are not politically active and do not vote … men do. Oh and one Amish family has an average of seven children. Average!
Finally, I am sure that the question of “Where am I?” cannot even be answered by the Amish themselves. In a shop of self-made food and furniture, a couple from Holland wants to buy a Quillow – a fashionable combination of pillow and quilt. The Amish shop keeper tells them that they can ship it anywhere they like. The couple asks whether they could also ship the quillow to the Netherlands. “Is that out of country?” In Pennsylvania Dutch Country people don’t know anything about the Netherlands or Europe. They live in their community with the local values and needs. Any further information is not required.
Another question pops up: They don’t accept and tolerate our world. But they expect us to respect theirs. And we do, of course. Because they ask us to. And nobody gets hurt by that. However, isn’t there some kind of double standard coming through?